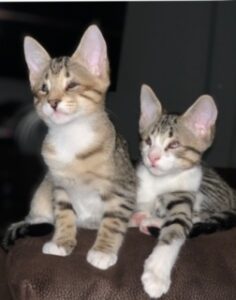 “There were two tiny kittens left in a landfill. They were only about 2 weeks old, and they were covered in fleas and brake fluid. I’m working from home during Covid, so I was able to take them in and bottle feed them. I named them Tiger and Rocky.

Once they were clean, I noticed their eyes did not look normal. I contacted Kitty Kat Haven, and they helped me see an eye specialist. We found out from the specialist that their eyelids did not form. This caused their hair to rub their corneas and irritate the eyes.

Without expensive surgery, the kittens would go blind, making it extremely difficult for them to be adopted. I was able to foster them until they reached 14 weeks, putting ointment in their eyes twice a day to prevent further damage to their eyes.

They are now with another foster family who will care for them until they have surgery. While enhancing human lives through my work with eye donation, I was able to save two kittens’ eyes.”